In 2020, Vikes engaged in development cooperation on three continents and in seven countries. In Finland, journalists were trained and an online course on sustainable development was built. 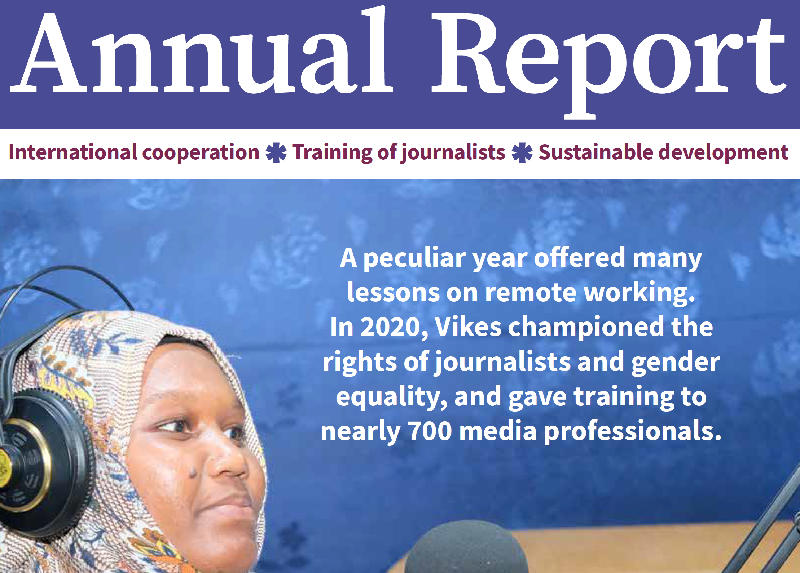 The Annual Report tells of the impact of our activities.
Click picture for the full pdf file.

The Annual Report of Vikes shows how the foundation and its partners worked well even under a pandemic in 2020. Several activities were however delayed or had to change shape, and travel was reduced to a minimum. The safety of staff, partners and volunteers became a top priority.

On the other hand, during the year we learned to conduct trainings and events online, and tools for working remotely became very familiar to us, both domestically and internationally.

Our partners in many countries took on the new world situation, and were actively communicating and doing journalism about the coronavirus. In Central America, Vikes’ partners conducted investigative journalism on, among other things, the management of the corona situation and related secrecy and corruption.

In many countries, projects continued as planned, but adapting to the new situation.

A long-awaited web portal for community radio stations was launched in Tanzania, and the project is expanding to Uganda and Kenya when travel restrictions allow. Training on gender-sensitive journalism and leadership skills was provided in Nepal and Tanzania, and campaigns were organized in Tanzania to promote gender equality in media.

Myanmar was in a tight lockdown because of covid-19, but Yangon Film School still managed to train new documentary filmmakers and transfer its operations more and more to local hands.

A new weekly children’s program was launched on Somali National Television SNTV, with children and young people themselves involved. The new program has been a success: it was named Best Program of the Year of SNTV.

Vikes was also active in Finland. In 2020, we organized trainings and a social media campaign as part of an EU project, and with the support of the Ministry for Foreign Affairs, an online course on sustainable development themes for journalism students was compiled, together with the news site Maailma.net.

During 2020, Vikes’ organization and administration were developed as Vikes prepared to apply for the program support from the Ministry for Foreign Affairs. The reforms included, for example, the development of ethical code of conduct of Vikes (link leads to a pdf file).

Vikes’ budget in 2020 was around € 1.17 million, with the largest donors being the Ministry for Foreign Affairs and the European Commission. Important funders also included Unesco, the Nose Day Foundation, the Oskar Öflund Foundation, Fingo, Felm, the Union of Journalists in Finland, as well as many associations and private donors.

The majority of the budget was spent on development cooperation.

Just before the pandemic struck, Vikes moved to new premises inside the office of the Union of Journalists, but staff mostly worked from home because of covid.

The chaiperson was Aura Neuvonen and executive director Auli Starck.