Hannamari Hoikkala and Carita Pettersson were in Tanzania in March to support a project for women journalists run by Vikes and local partners. Due to Covid the trip was cut short, but progress was still seen.

Hannamari Hoikkala (left) and Carita Pettersson at a leadership course at the Media Council of Tanzania. Photo by Esa SalminenJournalist Hannamari Hoikkala spent just under three weeks in Tanzania in March as a Vikes volunteer. She was preparing a mentoring programme for women journalists at different stages of their careers: recent graduates, those who have been in the workforce for longer and women in or aspiring to management positions.

The programme is part of Vikes and local partners’ Women in Media project in Tanzania and Nepal.

“For young journalists, mentoring is actually about practising professional skills, as there is a great need for this when there are few opportunities for training during their studies,” says Hoikkala.

She has participated in the mentoring as a mentored person, or as an actor, as the role is usually called in Finland. This provided a good basis, and Hoikkala also studied the literature and interviewed experts so that she had something to draw on. The programme will be implemented by Tanzanian partners, who will select and train mentors and support the mentoring process.

The discussions were conducted in a smooth and open spirit, and resulted in a framework for testing the programme first – as soon as possible, as the coronavirus has also caused movement restrictions in Tanzania.

Hoikkala’s design work was also left a little unfinished, as the pandemic forced Hoikkala and journalist Carita Pettersson to return to Finland from Tanzania ahead of schedule.

“If we had had time to meet once or twice more, we could have gone into more detail, but this is a good start,” says Hoikkala.

Still a long way to equality

Carita Pettersson’s task during the volunteer period was to assess the willingness and capacity of media houses to introduce equality plans. During the visit, the Media Council of Tanzania (MCT) published a gender report, with the intention that Pettersson would have participated in lobbying visits to media houses.

In this respect, the work remained unfinished because no visits to the editorial offices were made. However, Pettersson was able to attend the launch event and a leadership training for women journalists, and held discussions on promoting gender equality.

“At the launch, you could see that there was a lot of thought and will,” says Pettersson.

She was particularly impressed by Tanzanian Media Women’s Association Tamwa, whose women she found very knowledgeable.

“They know their stuff,” says Pettersson. 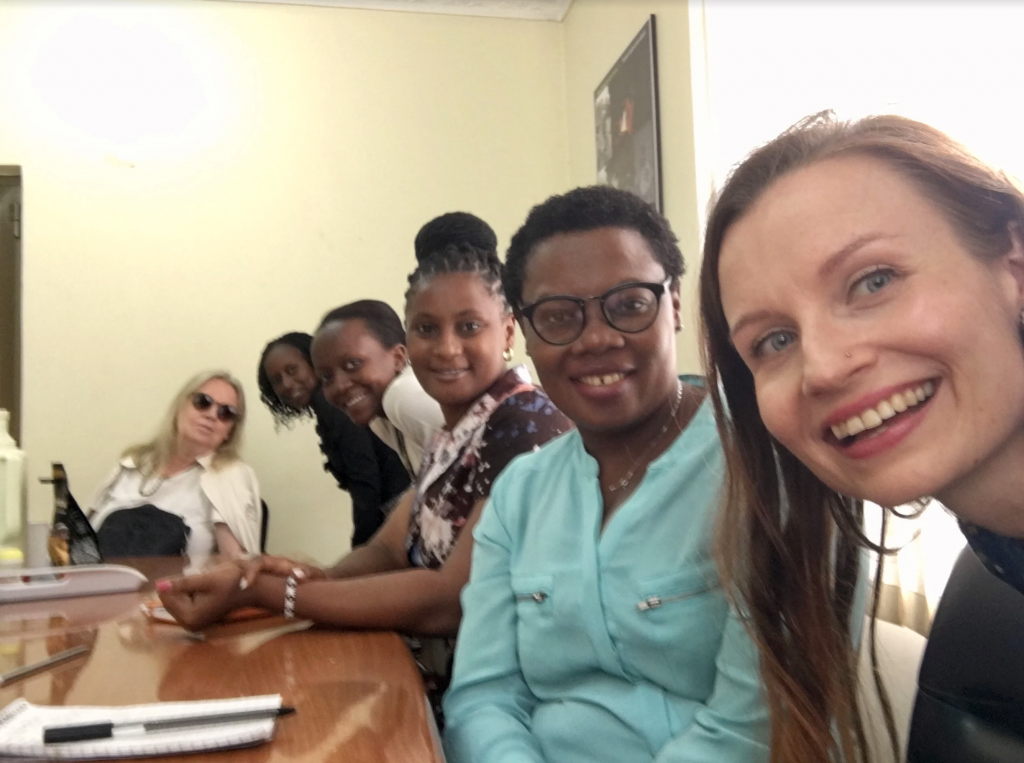 A visit to a women’s organisation in Tamwa. Photo by Hannamari Hoikkala

Gender equality work is always a tough job, and she says a lot remains to be done, for example, to make women financially independent from their husbands.

Gender equality plans are important, but they do not automatically solve attitudinal problems.

“There are many countries in the world where all the laws and regulations are in place but not necessarily followed,” says Pettersson.

In Tanzania, Pettersson recognised attitudes that were familiar from years ago in Finland. For example, when she pointed out that women should support each other more, vote for women and tackle the fact that another “all male panel” was being organised somewhere, these ideas were laughed at a bit.

“It’s not black and white, but that kind of thinking would be a step forward,” he says.

Another familiar attitude came from the men. Tamwa, the women’s journalists’ association, has been vocal in calling for an end to sexual harassment, and to Pettersson’s surprise, not only managers but also sources may be harassing women journalists. To this, a male leader of an organisation said that the problem is also that women offer themselves.

“It can look like that,” says Pettersson. “Personally, I think women have adapted to the situation and think that this is the way to do it and it’s somehow part of the job description. Hopefully we can influence that.”

She was pleased that the harassment was discussed very openly: it was said that this problem exists and must stop.

Harassment is one of the themes that mentoring also addresses,” says Hoikkala.

“There is a clear need for the programme to raise awareness about harassment in the workplace and how to protect against it, as it is an issue that makes the work of women journalists difficult.”

Carita Pettersson says she was happy to volunteer and will continue to do what she can, either from home or abroad.

“I have a lot of gender training, but I have not been able to use it much. It was nice to get to think about these things again.”

Hannamari Hoikkala’s volunteer work supported her current studies: she is on sabbatical from the Finnish Broadcasting Company Yle and is studying at the University of Helsinki in the English-language Master’s programme in Global Politics, a line of study focusing on media and democracy.

“This has been an opportunity to share what you have learned and learn from it yourself.”

She does not think that as a Western journalist she is somehow ahead of her Tanzanian colleagues.

“There are many issues where journalists are on the same page – the changing media environment with the internet and different platforms, and climate change issues as few examples,” says Hoikkala.

“When we talked about mobile journalism, for example, people were really knowledgeable.”

She found volunteering a good opportunity to gain new perspectives. Afterwards it turned out that she can also use the volunteering as a study-related internship.

“It’s great to be able to participate as a journalist in something like this, and hopefully it will also benefit Vikes and others.”

Vikes and the Finnish Embassy met with Somali media and researchers in Mogadishu. The round table discussion envisioned a better quality media that strives for peace.

END_OF_DOCUMENT_TOKEN_TO_BE_REPLACED

Freedom of expression in SomaliaNews

Journalist Wali Hashi has been recruited as a Vikes expert. Hash's responsibilities include Vikes' development programme in Somalia and advocacy work.