Development or security: Which comes first?

Is a secure environment a precondition for successful development cooperation, or is it development that brings about stableness and security? Experts gathered in Tallinn to discuss how to create coordinated response between the two worlds. 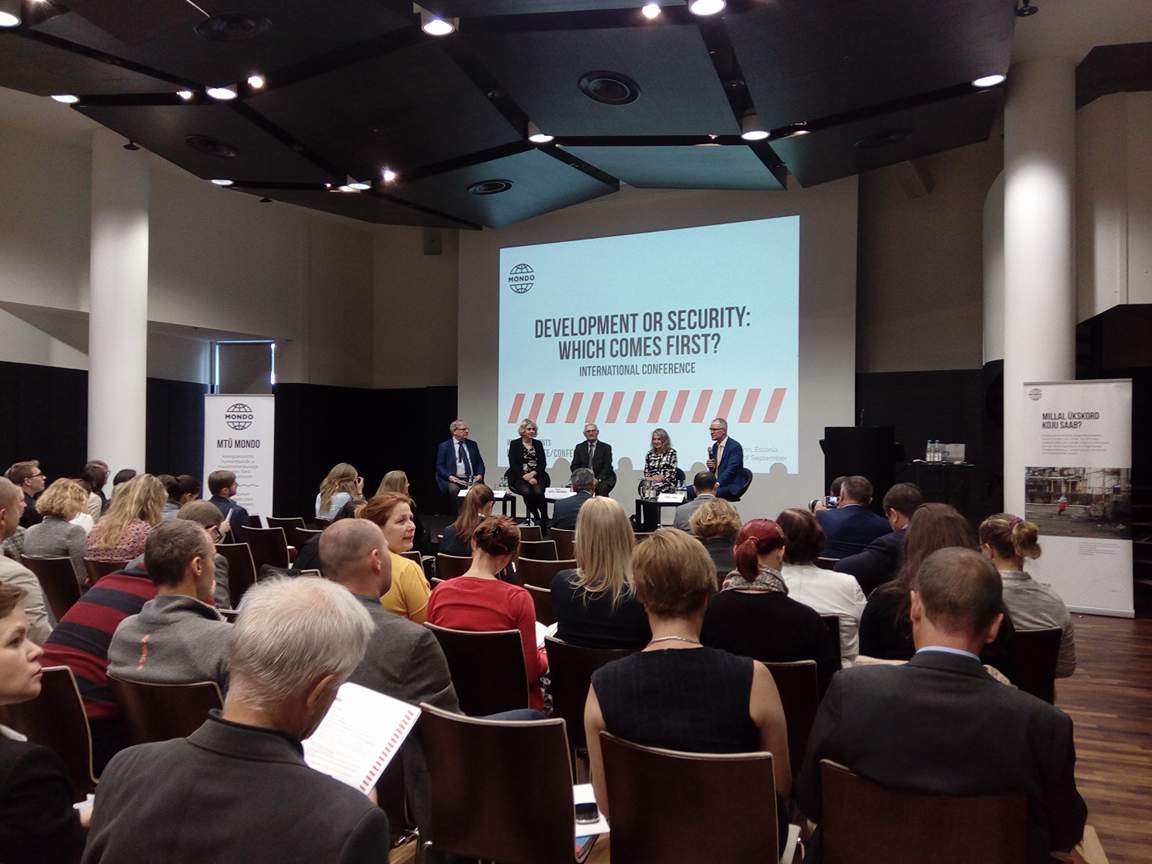 “We have to acknowledge that in the past few decades the nature of conflicts has changed”, the Estonian Minister of Foreign Affairs, Sven Mikser, highlighted in his keynote speech in Tallinn on the 6th September. A group of experts on security and development had gathered to speak about security and development in general, and Afghanistan in particular.

“Conflicts last longer, and involve mass displacements of population” minister Mikser continued. “In 2016, around 20% of the world population was affected by conflicts and violence. One approach alone is not enough; we need to find the right balance between humanitarian, military and development interventions.”

However, creating coordinated response and mutual understanding between the military and development practitioners remains a challenge.

“There are no structures in place for joint coordination, nor funding. This lack of coordination often results in overlap and contradiction in interventions”, Maria Mekri, Director of SaferGlobe peace and security think tank in Finland, pointed out.

With a huge number of people displaced by conflict, aid practitioners must be wary of creating pockets of basic services only focused on certain areas, called “aid bubbles”. Aid bubbles often happen in areas where violence is heated, but there is still some possibility for organisations to function, often secured by military presence. Aid bubbles exacerbate fragmentation of societies, and can even create an illusion that incidents must be created to get projects.

Brigade General Alois A. Hirschmugl, the Humanitarian Affairs Advisor to the Austrian Chief of Defence Staff, analyses the benefits and risks of military involvement: “There should be increased clarity on what the mission and mandate of the military is in different situations. Physical security must be secured before development can take place, the population’s basic needs must be met. The problem is that military troops often remain on site too long”.

Harmful, unintended outcomes can be the by-product of prolonged military involvement.

Is it right to use ODA – official development aid – for security interventions? The NGO world has already voiced out its concern about the overall direction of European development cooperation being instrumentalised in favour of securitisation.

In the conference and roundtable, opinions varied.

“To put development into military hands is like asking NGO staff to go win a war”, muses Jawed Nader, Director of BAAG UK, an NGO working in Afghanistan.
The necessity of military support was, however, highlighted in situations, where a country’s core institutions have been torn down and physical danger cannot be ignored.

“The strength of the military is that it gets things done. For example, in Liberia none of the humanitarian work could have been done without UN military support to ensure physical security for both NGOs and the population”, remarks Tiina Intelmann, former Head of the EU delegation to Liberia.

The NGOs present in Tallinn leaned towards ODA continuing to be used for long-term development interventions in the future.

“The military approach and development are very difficult to reconcile. Development interventions are long-term work, whereas military missions are clearly timed and with one specific goal: destroy the enemy and ensure basic, physical security to civilians”, Riina Kuusik-Rajasaar from NGO Mondo outlines.

In specific situations, closer cooperation and funding could be interesting to experiment with: “Violent extremism may be one case in point, where development practitioners and military could come together: development for prevention of the formation of these movements, and military working to contain them”, says Niina Tenhio, Head of Development Cooperation from the Embassy of Finland in Kabul.